On USDJPY, I have had no position these days but today I made short entry (S1) with a triple top in 15 minute chart. I put a sell stop at 106.600 slightly lower than the actual BB2σ.
After that, it fell and negative cloud developed in 15 minute chart. Now my urealize profit near 30 ticks.
Well, anyway, the lower price target is around 106.200 at KPPI50 (black) in 60 minute chart.I would like to make hedge long at that point instead of taking profit by limit order, In the end, I liquidated the long at 105.850 (L1) by hitting sell stop at 105.900. However, the price didn't go down further so I also covered short (106.544) at 106.080 when it came back to 106 area.
After that, it looks a dirty chart and is difficult to trade, but the 60 minute MA26 and BB centerline are slowly rising, and would test  60-minute KPPI78 (around 106.550) again? If it rise rapidly, there is a high possibility that it will end with a triple top, so if it breaks out, I would like to put a sell stop at that level.
In addition, the 15 minute chart shows us that price may be in the final phase of rising, So after another rise, I would like to make short if the heikinashi turns negative in 15 minute chart.
We don't expect a good profit in such a dirty chart, BTCUSD came back to 10000 area after it had gone down to 9600 area.
Yesterday I couldn't see PC in the daytime, but I made a short(S1) at around 10500 area on a 15 minute chart basis at night in Japan Time.
When entering the middle of a trend like this, it is very important to find "which time bar that fits the trend”. “Fit to the trend”are coined words in my own.That means the trend continues while touching the MA26 and BB centerlines with correction.
In this BTCUSD downtrend,15 minute chart obviously fits the trend. You can see that there is no touch in 60 minute chart and it is difficult to enter.
Now, as for the trade, I exited from S1 and made profit at around mid-9600 area after confirming that the 60-minute BB-2σine was flat. And I made new long (L1).This time, I could not order usual buy stop and I did market order.
Price is trying to touch MA26 BB centerline in 60 minute chart right now, so It is possible that price would be bounced back to form a double bottom. Watch carefully. 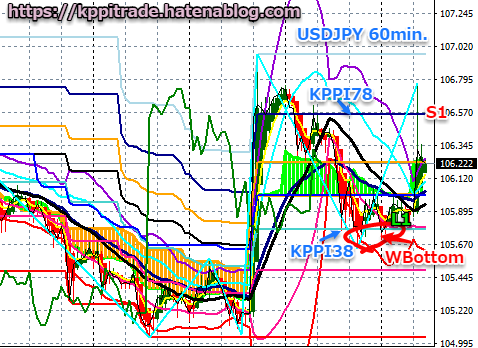 On USDJPY, after I confirmed a double bottom at the KPPI38 line in 60 minute chart, I made a long entry at 105.850 (L1). After that, the price suddenly jumped up. But I thought it would be short-lived since there was no cloud trend, so I made short entry (S1) at the KPPI78 line with sell stop (106.554), It looked like fireworks.
After that, I did the “5tick withdrawal law”. The strategy is to keep minimum 5 tick profit of both positions by stop orders near the contract prices of both positions. And when the price breaks out, one stop order is hit and the profit of otherside position gains.
In this blog, I have no memory of trading with KPPI milestones like this, but this is one of my best strategies.
However, it is valid only when the distance of high and low KPPI levels are widen after rapid rally or drop. Use a long time chart longer than 60 minutes. It cannot be used with a short time.
Anyway,I made "anko patch" (straddling with unrealized profits) and waiting for breakout. 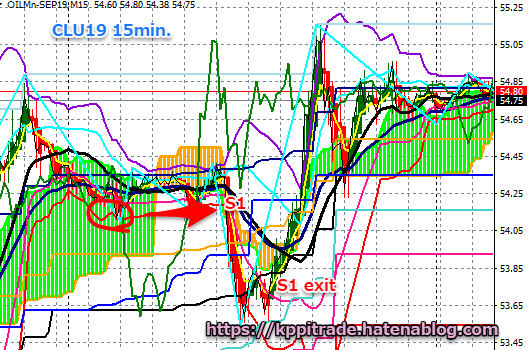 On crude oil, chiko span in 15 minute chart eventually fell below BB-2σ, so I made hedge short. And the decline stopped at KPPI61 (Orange, point A) on the 60-minute chart.
I made short (S1) at 54.10 and after confirming the double bottom of the 15 minute, I took a profit at 53.73 where hekinashi tunred positive.
After that, the price rose sharply with a breakout of BB2σ, I put a sell stop at 54.87 and it was hit (S2). After that, it fell, but after hitting the BB center line, it rebounded very rapidly so I lost some profit and exit at 54.40.
Now, with the exact same pattern, I put a sell stop at 54.96 (S3) and and it was hit(S3).  I still hold it.
Well, the shape looks like the double top, but crude oil is very persistent market, so there is still a possibility of triple top or break out.
Therefore, I still hold L1 at 50.90. USDJPY has been in a narrow range but quite moving. As I have already tweeted, I made a long (L1) in the 105.30 area after I confirmed that the hekinashi in 60 minute chart turned positive last night in Japan Time. Although it was a little sluggish last night, it broke through 105.50 this morning. After I saw it stopped at the upper limit of the negative cloud, I made a hedge short near 105.490 of the flat BB2σ (purple).
Well, it might be hard to make outright short in this case. But it was easy to make short because I already had long in lower area.
Normally I hold L1 until MA5 deadcrosses with MA26 and BB centerline. But if I do so, I would lose profit this time, So I liqidated L1 afer making sure that the hekinashi in 60 minute chart turned negative at around 105.40.
Currently I hold only short (S1) .Because I think that the BB line, which has been leveling off, expands when price breaks down further.

Copyright © 2019 Let's trade in style by the KPPI All rights reserved.

Login to quote this blog

You cannot quote because this article is private.